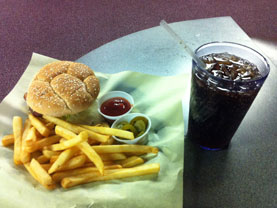 Most people think of College BIlliards as a great place to play pool. Did you know that they are famous for their hamburger’s too? My personal favorite is the Cheeseburger with bacon.

Ever wonder about the origins of the American hamburger? An expert in Texas history Frank X. Tolbert credits the American version of the hamburger to Athens, Texas resident Fletcher Davis. In the late 1880s, Davis is reputed to have sold hamburgers at his café in Athens, Texas. In 1904 he then brought them to the St. Louis World’s Fair. A Dairy Queen spokesperson made a similar claim in the 1980s calling Athens the birthplace of the hamburger. Interestingly McDonald’s hamburger chain claims the inventor of the modern hamburger was an unknown food vendor at the 1904 St. Louis World’s Fair. Frank Tolbert’s research confirms that Fletcher Davis was the “unknown food vendor”.
Thank you Fletcher Davis and thank you College BIlliards for keeping the alive the delicious American tradition that is called the hamburger!